How to Transform Your Business with Franchise Events

Share on facebook
Share on twitter
Share on linkedin
Share on email
In our article last month we focused on the traits that all successful franchise consultants share. Considering all the different ways people run their franchise consulting business and generate leads, we searched for a similar thread. We discovered that, in addition to a strong desire to help people, they all spend their time, money and energy focused on what they’re good at.
I’ve never claimed to be a psychic, but I have a good feeling about the future. I think Malcolm Reid from ProGlobal Business Advisors has the potential to wind up on the stage at next year’s International Franchise Brokers Conference and Expo holding an award. I feel like he’s going to do great things as a franchise consultant and through 2016.
Every time I’ve speak with Malcolm I come away even more impressed. In getting to know him I’ve come to learn that Malcolm doesn’t do anything unless he knows he’ll be the best at it, and isn’t going to quit until he is. He has lofty goals and the determination, smarts, and personality to achieve them. To me, he is the living embodiment of the quote “life isn’t about avoiding risks, it’s about making calculations and going all in with the things you love.”
Prior to joining the FBA in July of 2015 he was very successful as a multi-unit General Manager in the auto industry. He was living the American Dream and had built a beautiful life for his family. The only problem was he didn’t have the time to enjoy it! His job was incredibly demanding and pulled him away from all life’s important events. Eventually, Malcolm decided that he wanted something different and started looking into owning his own business. Through entrepreneurship he could control his schedule, earn a comfortable living, and continue to use his skills and experience to overcome challenges. Committed to this life change, Malcolm began searching for franchises.
He searched for a while and was just about to move forward with his decision when a mysterious email popped up. Through FBA’s newsletter he was introduced to the idea of representing franchises. “What I like best about the idea of being a franchise broker was that it doesn’t have the things that had me questioning purchasing a franchise in the first place. With franchise consulting, I’m not restricted to a territory and it doesn’t have any ongoing royalties. I’m free to grow my business however I want and as big as I want.”
In his diligence he flew from his home in Maryland to FBA’s headquarters in Orlando, FL. “Meeting the FBA team confirmed everything for me. There was such positive energy, high fives and hugs – I’m a hugger – I made the decision immediately.”

Focus on Being the Hunted Not the Hunter

When speaking with Malcolm for this article he told me his secret “I want to be the hunted. Not the hunter.”  This idea has been the primary influence in his approach to starting his business. He’s looking for his niche and capitalizing on untapped opportunities within the marketplace, while at the same time using his strengths as a marketer and speaker to cultivate leads and fine tune his plans for the future. Many of these efforts have already produced impressive results.
Mike Tyson has said “Everyone has a plan until they get hit.” That’s exactly what happened when Malclom attended a conference focused on Women in Business. He had his expectations on how the franchise event would play out – he would hand out some business cards, give a inspirational talk, and hopefully be connected with a few potential franchisees. In total there were about 300 attendees and a few national celebrities presenting on the main stage.
He had negotiated a small speaking opportunity on the first day of the conference in which he mentioned that he would be hosting a break-out session on business ownership the following day. It was expected that only 30 people would attend his session because it was scheduled at the same time as the main event.
Then Malcolm got hit.  Over 200 people were lined up wanting to attend his session! It was so popular that the conference organizers had to bump the celebrities to a later time and they put Malcolm up on the main stage.

“The audience was filled with small business owners or aspiring business owners. I felt what better way to achieve success than through franchsing? After this conference I  had 37 motivated leads. Some of those will be deals. I also met a lot of people who had businesses and wanted to franchise them.”

Looking to the Future, Can This Success be Replicated? 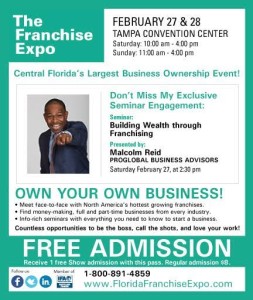 In fact, yes! It has been replicated. Just a couple months later Malcolm held his second franchise event. This time, he organized the whole thing himself.  It was a Business Ownership franchise event where people could discover opportunities and learn everything they need to know to start a business. Leveraging his personal network, he was able to host the event at a church in North Carolina for no cost at all. The next hurdle would be to get people to attend.
Through the church, he spoke with the pastor and together they assembled a small team. This team would canvas the city and be his boots on the ground. In return Malcolm would pay them each $50 for every 10 attendees and would give the whole team 25% of any closed deals. Through conference calls he was able to stay in touch with them and keep things on track.
This franchise event had even better results than his first. The conference was very well attended and Malcolm was able to get his message out. Of course, several people were interested in being a business owner, so the next step is to qualify them and see if they are serious and committed to the process of moving to franchise ownership.
To achieve this Malcolm offered an initial consultation for $499 and had 11 people take him up on it and are now going through his process. Even considering his costs to put on the event and pay his team, Malcolm is getting paid to take leads.
Looking to the future he’s adopted this as a primary driver to generate his leads and has scheduled three upcoming franchise events. At each one he first negotiates a speaking opportunity for himself. Then he works back towards sponsorship opportunities and getting a booth. “If I’m not going to be able to speak at a franchise event then I’m not interested in going. For me I feel like approaching franchise consulting from this angle is a better use of my time and funds. It’s up to me to give them the right information and push the right buttons. The best part is I don’t have to sift through internet leads to find interested candidates. They’re right in front of me.”

You can find Malcolm at his ProGlobal Business Advisors website or at the following events:
PrevPrevKicking off 2016: Objectives & Updates
NextTop 5 lessons learned from a lifetime of owning a franchiseNext