Finding the Confidence to Be Exceptional in Franchising 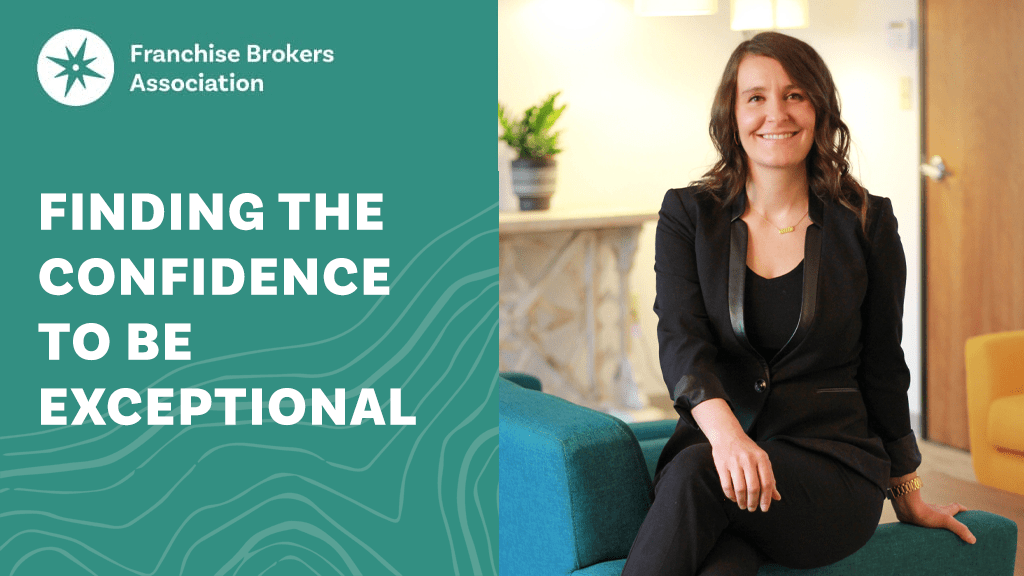 As we enter 2021, many of us have dreams of how our year may look. If your dream involves becoming exceptional, pursuing your passions, and finding the freedom that franchising can offer, you’re in the right place. To help inspire you and get you started on the right path, FBA CEO Sabrina Wall shared her love story with franchising and how she built her own confidence to find success.

Sometimes life happens to you instead of you planning the path.  For me and franchising, that is exactly how our love story began.  I was not looking to start a franchise, but I met a few people who owned a franchise.  They were not sophisticated.  They were young.  They were a little rough around the edges but they were smart and they were scrappy.  I was amazed they owned a franchise together.  Two young guys not coming from much who together owned a franchise with employees and accounts they managed.  That is where the idea of owning a franchise started for me.  If they can do it, I can do it too.

“If they can do it, I can do it too”, is one of the most important and empowering phrases one can say to themselves.  It is the comment that begins a legacy.  It requires confidence and practicality and with it, so many amazing things have occurred.

In 1954, Roger Bannister broke the record for the 4-minute mile.  Many thought it was impossible prior to his achievement.  After he did it, hundreds of runners achieved that time and better.  There is something that happens when people see others achieving something.  They think to themselves, “if he can do it, I can do it”.

I have heard this same phrase so many times in my professional franchise career when franchise buyers are interviewing current franchise owners to see what their experience has been like. After that interview, they will report back to me their feedback and they say, “If they can do it, I can do it.”  And that is the honest truth.  You can do it.   You were designed to achieve success too and you can do it.  If you pick the right system, follow it, and use the support available- you can do this.

We often say at the Franchise Brokers Association, “With the right tools and teams, you can be exceptional.”  Franchising done well, makes that happen.

During the interviews with Franchise Owners (called validations), these Franchise Buyers hear incredible success stories. They are left with an understanding of how GOOD franchises help Franchise Owners create great businesses.  I talk to millionaires every day in the franchise space. How did they become millionaires? The franchise model helps distribute the workload and takes parts of it off the owners so they can be freed up to do the roles they are exceptional at.  That may be leading, managing, marketing, or operational procedures.  Different franchises complement different people and bring out the best in those people.  You have to find the franchise that brings out the best in you.

Finding the Best Franchise for You

Taking a step back, I said earlier, I fell in love with franchising.  That is the truth.  I jumped headfirst into franchising because I discovered with great delight that anyone who wanted it, and had a few years of good financial decision making, could become a franchise owner.  I discovered this because I started a franchise at the same time I became a Franchise Broker.

Franchising is a very unique segment of the business.  It allows people with an entrepreneurial and independence-minded spirit to start a business, learn the rope, and reduce their risk.  The Franchise Owner essentially partners with the Franchise system and they share work between them.  This makes it easier for the Franchise Owner to scale and grow the business because they are not in charge of every component of running it.

Because of this, franchising is ideal for those people who do not want to become a slave to their business, those who want to scale quickly, and for those who want to have a higher probability of succeeding as a business owner.  That is if the selection of the franchise is done properly upfront.

Understanding What Makes a GOOD Franchise

I found early on that all franchises are NOT created equal and the huge variety in the quality of the systems was remarkable.  Some systems are so well refined, they have 5 people to call on for every unique need the franchise owner has.  Other systems don’t offer an inkling of support and misrepresent their offer.  It is critically important to do proper research in the investigative process before purchasing a franchise.

However, most people don’t understand what they are reading.  They don’t get a franchise attorney who does understand FDD’s to review it and they don’t know what to look for to uncover these key facts.  As a result, people buy franchises that aren’t good systems or aren’t good systems for them.  We do not want that to be you.  A GOOD franchise for one person is a terrible franchise for another.  Just like you wouldn’t put a shy financial analyst in an aggressive outbound sales position, you have to find franchises that fit your talents in order to be successful with it.

When done right, with a strong team around you, you really can be exceptional as a franchise and business owner.  That’s why we always tell people, “with the right tools and teams, you can be exceptional”.  Remember that.  It’s the truth.   Now, let’s find you the right tools and teams.  Your future of independence is waiting for you around the corner.  It’s time to find the confidence to own it.

Ready to take the first step toward franchising freedom? Contact us today to learn more about how we can help you find GOOD franchises and build your own success.