Finding Good Franchises: How to Buy a Franchise Framework 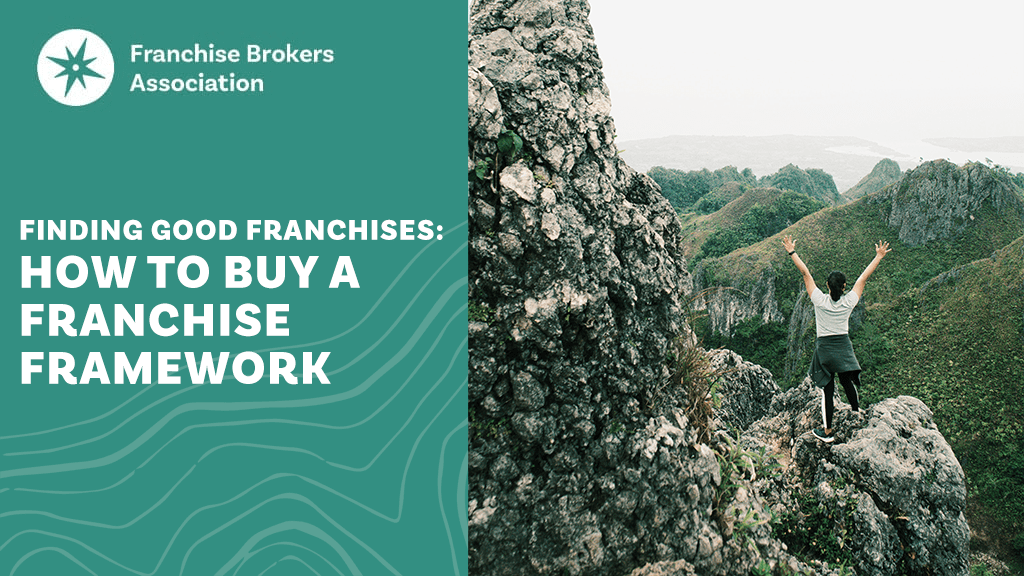 How to Build a Proper Franchise Framework

In Episode 7, we follow Rob, a fictitious white-collar exec with a blue-collar background. Rob wants to purchase a franchise, but like many hopeful franchisees, doesn’t know where to begin. We are going to follow Rob through this process, and learn how to build a solid franchise framework – with the right tools and team, of course. When done correctly, this process can pay off greatly in the long run.

Watching his dad work in a factory, Rob has hard work ingrained into him since a young child. Nothing was handed to him. He worked construction several summer seasons to pay his way through community college, and following graduation, landed a great job that allowed him to work his way up to an executive position.

What is Rob’s Current Situation?

After years of commitment to one company, he is now feeling uncertain about the future of his career. Direct leadership is becoming unclear, and there are whispers about more layoffs coming. Rob is ready to explore his dream of business ownership, however the security of a paycheck plus benefits have stopped him from fully exploring his hopes and dreams.

The thought of freedom and independence of business ownership has always been appealing, but not without fear of failure. Rob loves the support of his team, and being completely on his own seems a bit too risky for him. Franchising has been on his mind, but he doesn’t know much about it. But, he is ready to learn more.

Rob needs a knowledgeable team to help him through this situation, and help him discover a GOOD franchise for his skill sets.

As we always say, with the right tools and teams YOU can be exceptional. Rob is a go-getter, and jumps right into his own research. He begins by googling top franchises, and reaching out to owners and brokers. Sometimes the information out there doesn’t give prospective franchisees the full picture of a franchise. Luckily, Rob gets in touch with a well-qualified broker to lead him in the right direction.

Reaching out to a qualified broker, such as through FBA, can help set yourself up for success. After all, doing your own research won’t help if you don’t know the right questions to ask, and information to analyze.

“What we’ve seen is that when you partner with people that are complimenting your weaknesses and allowing you to accentuate your strengths, well, collectively, all of your strengths as a team are maximized,” says Amanda Ramirez. “And so the trick- is really getting the right team to support you.”

FBA has developed an easy-to-use evaluation checklist with questions to ask yourself along the way. For example, a franchise might look promising and lucrative from the outside, but once you do a deep dive into the facts, it could be a very different story.

Most people – like Rob – do not have the resources to take an uneducated leap and fail right off the bat. With this checklist, you definitely increase the odds that you will be successful with the franchise you choose. Check out our top five questions to help steer you in the right direction…

1.What is the business model for the franchise owner, and the franchisee themselves? Simply put, how do they make money?

It’s important to understand what the day-to-day revenue structure is of the franchise. This will help ensure that the opportunity fully aligns with your goals. The simple fact that some franchises do not create as much income as others – and you have to look at this when choosing a franchise. Does it meet your personal criteria for what you consider to be a successful career as a business owner?

2. What is the retention rate of that franchise organization?

Retention rates can vary greatly depending on many factors. It is important to ask enough follow-up questions to fully grasp where the franchise you are considering is at.

“The turnover rate isn’t inherently negative or positive, but it could be affected by a lot of different factors, like the franchise system itself and its performance.”says Karen Uger. “Also how the original agreement handles those renewal terms and what happens when they go through system changes.

3. Is the product going to do well?

Understanding the industry this franchise is in will help answer these questions. When it comes down to it, people need to be buying the product or service in order to make a franchise successful.

“It doesn’t matter what the franchisor or the franchisee says, if it’s the wrong industry for the wrong time, then there’s going to be a problem on the horizon,” says Eric Reiss.

4. What is the market viability and current territory restriction?

The market and territories have the ability to make or break a franchise owner. If you buy into a territory with no room for growth, things could go south (and we don’t mean a vacay in Florida!).

“If your goal – just like Rob – is to transition from corporate America and really scale a business, you could actually put a ceiling on yourself because you can only be in that zip code,” says Amanda. “And if you wanted to go and buy another location or if you wanted to expand to your area, you don’t have the ability to do so because there’s already other franchises in the market.”

Completing your due diligence on this part of the process can really help you in the end, especially if you are looking to grow down the line.

5. What is the franchise trying to accomplish? Is it done in a way that allows the individual units to become very profitable and help the system grow?

A franchise needs to be able to adapt and change their business model to the current times. This is the only way individual units can truly be successful. With the support from the franchise behind them, much more success is achievable. This is the magic behind franchising!

“One of the most impressive things I’ve seen this past year is the franchises that really did the pivot with COVID,” says Karen. “They adapted, and came up with entirely different ways of selling their services and their products.  I heard a couple of franchisees that were meeting or beating their weekly sales from the previous year before COVID.”

In the scenario where Rob follows this checklist and has a great team behind him, a GOOD franchise is chosen. Rob then becomes a successful, independent business owner, and he’s entered the next chapter of his life full of independence, opportunity and control.

There are many puzzle pieces to put together in order to make a successful purchase, but in the wise words of FBA’s CEO Sabrina Wall, “with the right tools and teams, YOU can be exceptional.” Contact us today if you’re ready to take the next step on your franchise journey.

Hear more from Sabrina Wall on how to build your proper franchise framework by watching the full episode below.